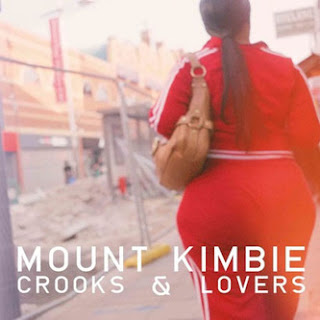 On Friday I had the pleasure of seeing Mount Kimbie perform at London's Heaven along with Sampha and Creep. 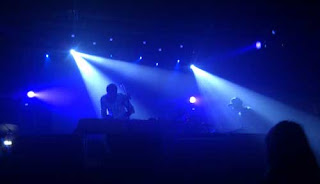 I've not been to Heaven before and I'd my first visit was made even better by hearing Sampha's sweet voice as I entered the venue. Other than his collaborative work in particular with SBTRKT, I wasn't familiar with his solo workso was really keen to get there early to check him out. If youre not familiar with his vocal syle, think along along the line Pevren Everet - very soulful. His set up was very simple, but with a voice like his, I'm not sure he needed much more.

Creep, a group comprising of DJ's Lauren Flax and Lauren Dillard, were completely  new to me but I'll definitely be up for seeing more from them in the future.Their sound complimented Mount Kimbie's but with a more ambient almost haunting feel to their music with minimal but well sung  vocal interludes played with equally haunting video art/ music video on the screen behind them. Where I feel they might have let themselves down a little is in their stage presence. The Brooklyn duo were accompanied be a cellist, they themselves spend the entire time behind their laptops/ mixers. Not strange for an electronic act but when one of the Laurens did pick up an electric guitar and started to sing, they chose to do it behind the safety of their Macs. A little more engagement with the audience wouldn't have gone a-miss... Hopefully in time they will explore and develop their stage presence. 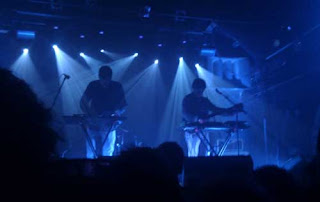 Mount Kimbie... well, they started strong and ended even stronger, building up to an upbeat, bass-filled crescendo. If you've heard their début album 'Crooks and Lovers' (and if you haven't, I'd strongly recommend it) you'll know their album runs the gamut of chilled out vibes to broken beat, 2-step, dub-step and house all with a bass-lines to keep the like of me happy. The only sore point for me, and I'm pretty sure the rest of the crowd would agree, was in the length of their set was pretty darn short at approximately 45 minutes. After hanging around for a few minutes after they had left the stage, expecting an encore, Dom (or Kai?) came back out to announce that they simply had no more music to play and to expect new material from them in the coming months. Sort, sweet but definitely worth the effort.
Posted by Missy D at 04:56