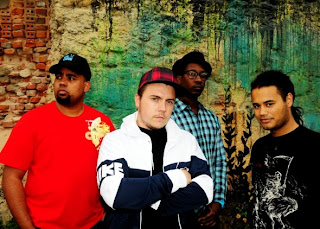 I haven’t been an avid follower of these guys but their name will appear on my radar every once in a while whether it be on a gig line-up or mix-tape. This little beauty has just popped up and I’ve gotta say, I can’t get enough of it.

If you’re not too familiar with them, here’s the skinny. Buraka Som Sistema are a 4 piece Portuguese group who’s beats fuse electronic, dub-step, hip-hop and African riddims (amongst others) to give them a sound which has gained them worldwide recognition especially within dance circles, sell-out events and

‘Hangover (BaBaBa)’ is a really fun, summery track with a real jump-up carnival feel - I definitely need to start paying far more attention to these guys...

You can read the full press release for the single on their website here. The single will be released on June 6th on Enchufada.