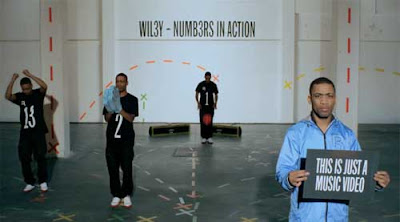 Most of you will have seen the Wiley listening party video up on You Tube where he gave us a quick taster into what we should expect from his forth coming album '100% Publishing' out on Big Dada this summer (I've included the video below for those who haven't seen it yet).

Now, Big Dada have posted the video for the first single from the album titled 'Numbers In Action' up on their YouTube channel.
It's bouncy, summery and lyrically it's on point, as always, with a clear message - he's been in the game for a while now, he's put in the hard work now it's time to... well, see some numbers in action...

A lot of effort has been put in to the video too which is the work of We Are Us. The visuals work with the style of the track with multiple Wiley's filling the studio. A simple idea well executed.

The track is available to buy in digital format now via itunes and various other online music stores.

Personally, I'm glad to see Wiley back and I'm loving this but let me know what you think in the comments.

Email ThisBlogThis!Share to TwitterShare to FacebookShare to Pinterest
Labels: 100% publishing, big dada, video, we are us, wiley